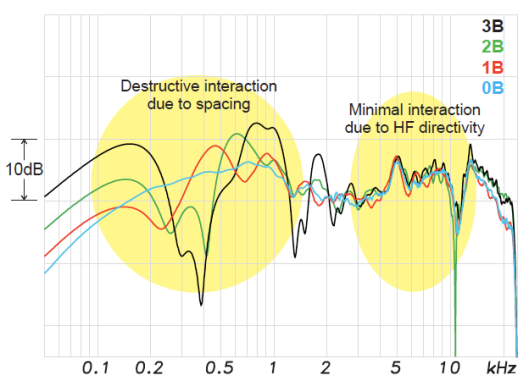 On the other hand, bass response is greatly dependent upon placement. The flattest bass occurs when the speaker is in the free standing position. That is why quality “bookshelf” speakers are usually sold with stands. It makes no sense to design a speaker for flat response and then spoil the achievement with improper speaker placement. In fact, it is difficult, if not impossible, to design a bookshelf speaker to be flat if it is placed on a bookshelf. With just one boundary the bass becomes exaggerated in the region where the uninformed listener has accused the loudspeaker of being peaky. Things get progressively worse when the loudspeaker is moved, first to the back wall and then to the corner. Check out the black line.

The classic LS3/5a’s were monitor speakers designed by the BBC to be used on location when recording. As such, like any small monitor loudspeakers, they were designed to be placed on stands.

Has AudioEngine made a mistake about the markeing of their own speakers? Not necessarily. There is a big market for computer desktop speakers. I just do not care to listen to great music that way. I want to sit back from the speakers and imagine that I have been transported to the concert hall, or at the least the recording studio.

The AudioEngine 2A+’s are almost the perfect monitor speakers from the mid-bass on up, for a small to medium sized room. They are even better with a subwoofer because their power handling is greatly improved, which reduces overall distortion and gives the low end a more solid underpinning. If set up properly the subwoofer will not be heard at all unless there is some low end material like a bass drum or a low organ pedal.

Does AudioEngine realize that their desktop speaker is a great monitor speaker? Probably. Or perhaps they simply got lucky with their design without knowing what they were doing. What do you think?