Over Christmas I have been listening to several recordings of Handel’s Messiah. Four special ones stood out: a CD, a vinyl recording, and two downloads from iTunes. Each one has a special significance for me. I never grow tired of this music and these recordings help explain the reason why. 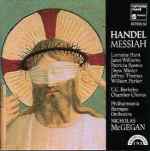 The CD recorded an interesting Messiah, indeed. It was performed by the Philharmonia Baroque Orchestra, Berkeley Chamber Chorus conducted by Nicholas McGegan (Harmonia Mundi Catalog #: 907050/52). As you may know, Handel continually tinkered with the manuscript, tailoring the performance for the musicians and singers he had available, as well as the intended audience. This recording includes nearly every revision and alternative version composed by Handel. You can cut and paste to come up with your own custom performance. (I was thinking about cutting and pasting in Kira te Kanawa as the soprano soloist on this and every Messiah recording, but I digress.). About six versions are possible from the 18 alternative tracks provided. The performance was most certainly Baroque. I found it very interesting and enjoyable, but I must say the scholarship may have gotten in the way of the performance overall.

The vinyl recording was the 1966 edition by Sir Colin Davis with the London Symphony Orchestra and Choir on Philips (6998 021). It is a masterpiece of balance and scale. Though he used modern instruments, Sir Colin stripped away the barnacles that had, up to that time, become standard practice for Messiah. Multiple choirs and oversized orchestras were the norm. Sir Colin has recorded Messiah numerous times since this one, but this one may be his best. Of course, it is no longer available, but you may find a copy in your local used vinyl store as I did. This recording was a watershed event. It changed the way Messiah would be performed from that point forward. How I let my original copy get away from me is beyond me!

My last two Messiah recordings were downloaded from iTunes. Both were remastered by Apple for iTunes. Yes, one can hear the difference in audio. These recordings are so good that I wish they were available in vinyl. What is so wonderful about the performers here is that they allow the story to unfold with minimum distractions and without pomposity. The message of the Messiah does not bow to the theatrical performance.  (Sorry Wolfgang, the music is not the message. It should merely convey the message.) 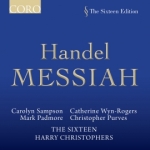 The first of the two is by the Sixteen and Orchestra of the Sixteen, conducted by Harry Christophers using period instruments. The Sixteen is a small but excellent choral group which has performed Messiah in concert over many years. It has honed and perfected its recital of the score. The sound is crisp and clear, especially the choral work. The small scale brings the performance right into your home. This recording of Handel’s Messiah on The Sixteen’s own label CORO won the prestigious Midem (Marché International du Disque et de l’Edition Musicale) award for 2009. 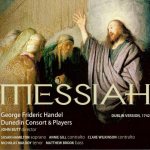 The pièce de résistance, however, is the recording by Scotland’s Dunedin Consort and Players led by John Butt. Winner of the 2007 Gramophone award for Best Baroque Vocal Recording, it is easy to understand why the recording won this award. The recorded sound is exceptional. The performance is out of this world! It is fresh and alive. Its scale is small and intimate, and the soloists and chorus are superb..The opening “Comfort Ye” brought tears to my eyes.

What is remarkable about this recording is that it attempts to recreate the premiere Dublin performance of 1742. Handle went to Dublin to try out his oratorio. He did not have a great number of musicians at his disposal and the available soloists were not up to London standards. However, he made do. He more than made do. The premiere was an instant hit. Handle concentrated on the story telling. The performance did not include some of his later elaborations and fine tuning which he was able to present in London with more skillful soloists and larger chorus.

One of the early concerns about Messiah is that it might lose something if it were moved from a sacred venue to a larger, secular venue. Perhaps there was some wisdom in this concern. The performance by the Dunedin Concert is simple and eloquent. What I like most about it is that the performers tell the story as if they truly believe the story. They sing with passion and demonstrate a love of the material.

Linn Records has done a phenomenal job on this recording. They offered a 180 gram vinyl of the recording if you can find it. No telling what it might be valued at today. They also offer a high-resolution download which may be purchased directly from them here. It is playable on iTunes but one would need an outboard DAC. The AudioEngine D3 DAC would do nicely – great sound at a great price.

Thank you Apple for offering such splendid recordings of Messiah mastered especially for iTunes. Great show!